A varied collection of thoughts and comments by A J King.

Somewhere in eternity time is running out…..

Set in the near future, ancient prophecies of the Bible come to life in real time. In a world shaken by disaster, Jack Ford’s comfortable life is suddenly turned upside down. Faced with grief and turmoil on an unimaginable scale, he comes face to face with his own eternal destiny. Meanwhile amidst promises of peace and security, a new world begins to arise out of the ashes of the old.

However all is not as it seems. As Jack embarks on the trail of a sinister conspiracy, he is reunited with his first love from sixteen years earlier. Caught up in a rollercoaster of subsequent events and playing a role they never imagined they would play, they discover who is really in control of the affairs of men. But can their astonishing discoveries really be true? And if they are, can they get the warning out in time? Or will the final deception be greater than the first?

Although we think of life as continuing as it always has done, the times in which we live are changing and becoming more and more uncertain. The Bible says events are moving towards an inexorable conclusion and part of that is a time of ‘shaking of all nations’ (Haggai 2:6-7). In this book I have tried to portray a possible scenario of future events. It is of course, a work of fiction, but it is based on Biblical prophecies concerning the so-called ‘end-times’. (A term which itself is something of a misnomer. I believe they should more correctly be called the ‘end of the age times’.)

All the elements in this story are entirely possible. Although some may seem a little outlandish, the recent Hurricane Sandy in the US demonstrated a degree of ‘shaking’ that has until only recently been thought of as unlikely. However, the Bible says that behind world events is the hand of the One who knows the end from the beginning, at times permitting, at other times preventing.

I have tried to incorporate the sense that despite everything God is in control and that, when properly understood, the prophecies of the Bible provide a clear light into the darkness (1Peter 2:19). Believers should not be afraid of the end times. They are about the fulfilment of God’s purposes leading to the return of His son Jesus, the establishment of His physical reign on earth from Jerusalem, and the restoration of Israel.

I have also incorporated certain elements into the novel that are intended to challenge and to provoke discussion and re-examination of the things we think we know, things we maybe take for granted. Perhaps we don’t have everything as neatly buttoned down as we like to think?

In the New Testament, people had an incomplete understanding of what the Scriptures had to say concerning the coming of the Messiah. They were told by their religious leaders he was indeed coming, but they didn’t have a good understanding of what the Bible actually said about it. This led to them making numerous mistakes. For instance, the disciples expected Jesus to be crowned King, but instead He was crucified.

They didn’t realise (until after His resurrection) that the purpose of His first coming was to be the “Lamb of God, who takes away the sin of the world,” and that His death was that of a substitutionary sacrifice. His second coming, however, will be in total contrast. It will be full of majesterial power and glory. He will return, not as a lamb, but as the Lion of the Tribe of Judah and the King of kings.

Like the first century disciples, our understanding of the times in which we live may be more informed by what we have read, watched, or heard about than by the Word of God itself. We too, like them, are in danger of misunderstanding the nature and timing of the Lord’s return if we are not aware of what the Bible says about it. It is my desire in writing this book, that, as well as being entertained, you will be challenged to re-examine the Scriptures concerning the times in which we live. 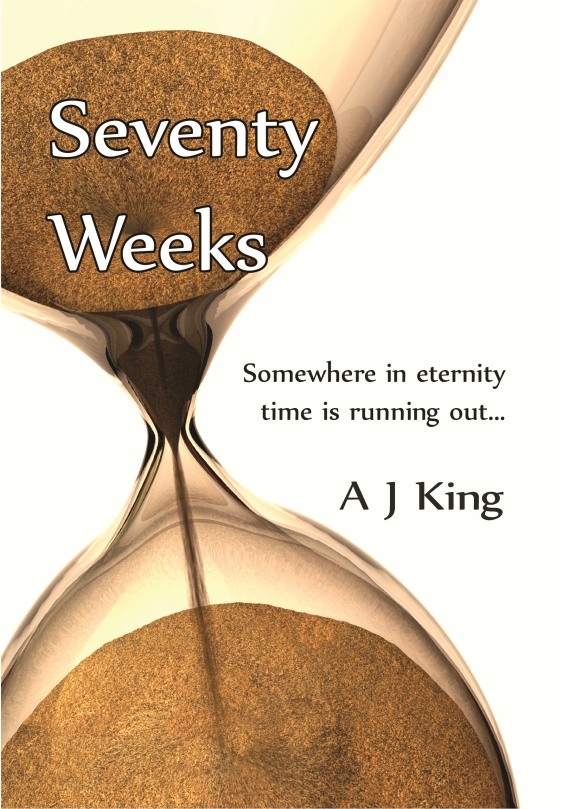 Thank you for your interest in buying Seventy Weeks. You can buy it in paperback in a number of ways. It is published by Lulu.com and you can have a copy delivered direct to your door by ordering here. Price: £9.99 plus delivery.

You can buy it in store at The Well, Scunthorpe, and at The Ice House, Grimsby. It will also become available in other Christian Bookshops and hopefully through other networks in the near future.

It is also available as an ebook on Amazon Kindle, Apple iTunes and iBookstore, Barnes & Noble’s Nook and on the Kobo. Alternatively, download it as an ebook from Lulu.com direct to your Blackberry Playbook and read it on the Book Reader app! Ebook price:£2.99

(The huge discounts required by the likes of Waterstones and Amazon make it uneconomic for it to be sold through these outlets. Sorry.)